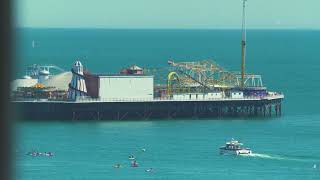 Unveiling in 2018 - The Grand Brighton

The Grand Brighton hotel have revealed a sneak preview of their restored Victorian façade with stunning video footage, ahead of its final unveiling in late autumn 2018. Due for completion later this year, the hotel’s famous 154 year-old exterior has seen major refurbishment resulting in new windows, restoration of balconies and rendering to its seafront façade, refreshing the face of this iconic Brighton landmark. The hotel continues to maintain its impactful status in the Br

The Grand Brighton and sister property Richmond Hill Hotel have held a dedicated month of wellbeing activity, throughout June 2018. With the hospitality and events industry cited as one of the most stressful to work in, the hotels encouraged employees, industry peers and guests alike to take stock of current habits and find simple adjustments to improve wellbeing day to day. Utilising social media, The Grand Brighton kicked off the campaign by releasing ‘digital mindfulness’

Time Well Spent During Your Conference in Brighton...

Your time is precious, so why spend it scrolling on your phone? Take the quiz to discover all the fantastic ways you can spend your break time during a conference in Brighton. For more information on meetings and events facilities at The Grand Brighton, click here.